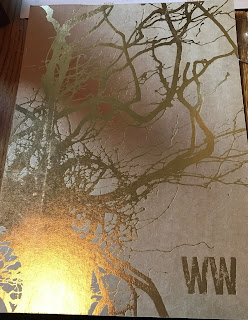 I thought I would share another idea of what you could do this Valentine’s Day. Joe and I really like eating out sometimes this means that we will take Jess with us sometimes. We do for meals without her usually this means we go when she is in nursery and we have an afternoon off. New Years Eve we decided that we wanted to go hunt for Lush Christmas sale items. We decided we wanted some food while in Peterborough. We found a restaurant which we hadn’t previously heard of Wildwood. Since this, I have researched them and found that they are a chain. They actually have one in York which we plan on going to very soon. 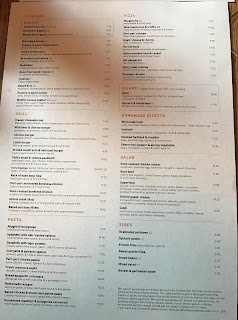 On first impression I could not believe how beautiful the restaurant is. The style reminded me of somewhere which was old but still was super stylish. There is a huge choice of food on the menu. This is great if you are like me and never know what you fancy. I was actually spoilt for choice but I am sure this happens to most people. If you are a fussy eater I am sure there is something which you would enjoy on this menu as well. 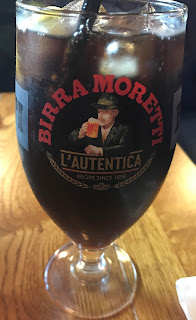 There are a range of cocktails that you could consume. Since it was lunchtime and Joe was driving I decided against this. Instead, we opted for a pint of coke. You do actually get charged for two cokes if you as for a pint and it comes in a beer glass. You do get the remainder of the coke in a glass coke bottle so you are not been overcharged for what you get. 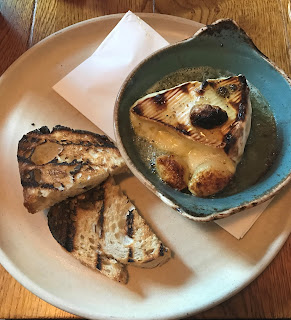 Now I am going to share with you a watch I actually ate at Wildwood.  We decided that we were going to have starters because we prefer savory to sweet.

I had the baked brie this was something which was beautiful. I am a huge fan of cheese anyway but to have it baked. For sure it is something which I would never have thought about making at home.  It came with some amazing fresh bread which was toasted. This did have some garlic in which I think really made the starter.  As you can see you do not get a lot but because it is cheese it does mean that it is super filling.  I would totally recommend this. Joe has a prawn cocktail and this looked amazing but I am not a huge fan of them. For some reason I hate big prawns I don’t know why this is. 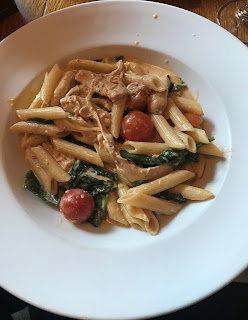 For main I decided that I was going to go for a pasta dish because this is something which I adore. The one which I went for was the Peri Peri Chicken Pasta this was one that was super full of flavour. This Peri Peri was super spicy but it did have a kick to it. This was tasty without been too hot however, I do like spicy foods it is worth noting. The portions are Wildwood do not look huge however, all the food is super filling. This means that it seems like the right amount. For sure I would have this should we go back to Wildwood.

Joe also choose a pasta dish which is not like him usually he will go for something proper meaty.  I think what he actually went for was a spaghetti bol even though I may have been wrong. It did look beautiful though I have to see if he can recreate this for me in the future. 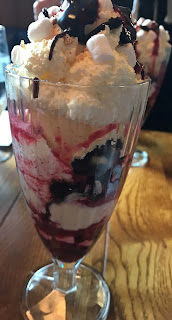 I am not a huge dessert fan as I have said in the past. We saw people who were close to us who had them and we could not resist the Raspberry Sundae. This was amazing it has the right amount of everything because of the fact that usually, they can be a little bit too sweet for me. This was not one which I found to be like this while writing this post I actually really crave I think it would be amazing if they could deliver one to me right now. 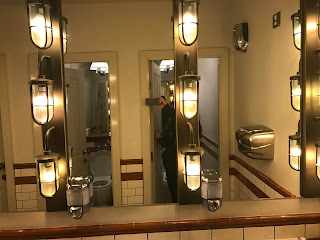 I will actually tell you I loved the restaurant it was so beautiful as you can see from the picture above it is in the bathroom. It actually reminds me of the lights you see backstage in theatres. I feel like this is what they are aiming to achieve and they do it so well as well. The Wildwood in Peterborough actually has a cinema in it which they have films in once a week. You can have a meal and go to the cinema in the same place which seems such a clever idea.

I am unsure if this is the same at all of them the films which they show are all up to date as well. For example, I am sure they had suicide squad advertised when we went. The whole meal including drinks cost us around the £50 mark and we were stuffed for a long time.  This is always something that I love when I go for a nice meal because I do not want to be eating again after a few hours.

Have you eaten at Wildwood if do what did you think?