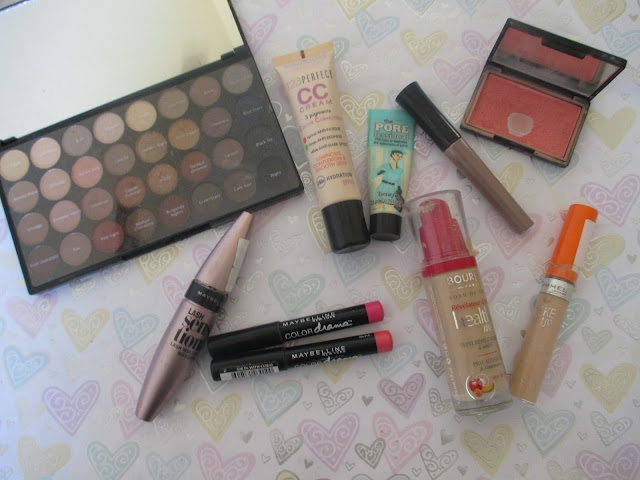 Hi Guys
I have decided that I am going to do an update of a post which I did in January which is what’s on my face. If this is something which you are interested in maybe this could be a monthly or every so many months kind of series.
To keep my eyeshadow in place all day I have been using the ELF eyeshadow primer in Champagne. I know  now this product has become really hard to get your hands on in the UK however have heard that the Freedom eye primer is very similar to this so I may get my hands on this when I am looking for my next drugstore primer instead of using my Urban Decay one every single day.  This primer keeps my eyeshadow on all day even with brands which I know would have worn away before if it was not for the use of a primer.
The eyeshadows which I have been using recently have been more than likely from the Make Up Revulation Flawless pallete.  They are some of the most pigmented eyeshadows which I have seen which you can pick up for not very much money at all. The shades are all very wearable which is unlikely when you have so many shades in one pallete usually there is a few in which you will never use. I am going to have a full review of this pallete and swatches in a future post so keep your eyes  peeled to see which shades I use the most.
Due to it been the summer months eye liner is not a product which I reach for due to the fact that I like to lighten my face up as much as I can so harsh black eyeliner is not something which graces my face.  So the last item which I used on my eyes is the Maybelline sensational drama mascara in Black. This product is one which I could rave about all week I promise I will not in this post but may have to do a post all about it. This mascara has stopped me reaching for the fake eyelashes because it can transform my lashes into fake ones with just a few applications.
The concealer which I have been using to make sure that the dark circles have been concealed is the Rimmel wake me up in Ivory. I have done a review on this product here so if you want to read my thoughts on it you can but let me just say in this post I don’t know where I would be without this gem.

The primer which I have been applying to my face in order to make my pores look smaller and my foundation apply better is the Benefit Porefessional. As you can see I only have a sample of this which I think I received in a goody bag from an event I attended.  I don’t mind this product I think it does the job which it states it will do but the one thing which puts me off purchasing the full size is one the price and the other is it can feel a bit greasy on my skin.
For foundation I have been mixing the Bourjois CC cream in Ivory and the Bourjois Healthy Mix Foundation in 52 Vanilla. I have found that this then gives me the perfect amount of coverage which I want and both shades work for me as the cc cream is slightly too light and the foundation is a shade I think to dark so blend a pump of each on the back of my hand and blend then I have the perfect shade.
The blush I have been using recently is the Sleek blush inRose Gold I feel like this gives me the perfect amount of glow without looking to glittery I just apply a light coverage of this on to my cheeks to give me some colour. This is a product which I have been using for a long time and am actually going to be sad when it runs out completely.
On my lips has been the Maybelline colour drama pencils inthe shades In the Coral and Fuchsia Desire. I have not been wearing both at the same time before you think that but  have been wearing either one or the other for the longest time. I feel like these are so easy to wear and they make me so confident and last a long time. I think these products might have to have a whole post dedicated to them in the next few weeks. I love them that much.
What has been on your face recently? Also let me know if you would like a review of any of the products mentioned and I will get one done.
Charlotte x