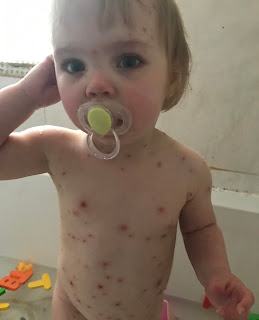 If you follow me on social media just before Easter Jess got chicken pox.  This is something which she really suffered with as you can tell from the picture above she does not actually look like herself her eyes looks so dark and she looks so out of it. That is apart from been covered in really bad spots as you can see the one near her boob looks really angry I think this was one of the worse ones which she actually got.

During this period of time I when Jess was struggling I was given so much advice on what people to me would help get rid of the pox which is something I needed to do because of the fact that we were going away a few days after the pox came out .I think it was around a week after she got sent home from nursery. I am going to share with you what I found worked when she was struggling.

These are my top tips do you have any others to parents who may be dealing with chicken pox?

Charlotte x
This post contains a PR sample however, this does not affect my opinon

7 thoughts on “Top Tips To Deal With Chicken Pox”