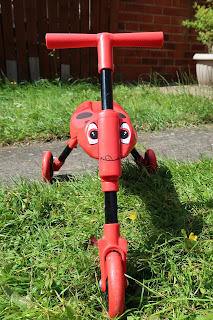 Scuttlebugs is something which I have known that I was going to purchase for Jess for a long time.  As you may know Jess is a child who loves to be outdoors. I am sure she hates it when she actually is stuck inside because the weather is not great. Way back at the start of May time I was looking at the scuttlebugs. I knew I wanted to get it early so that Jess could use it after nursery when the days were getting longer. Also if we have a nice weekend she could play on it in the garden. I found out that that they were retailing for around the £30 mark.

As you may know, I love a bargain and because of the fact that I was ahead of the season.  I thought I would have a look on Ebay and see if anyone was selling one.  One which has been barely used because this is not something which bothers me that much. I knew that I was just going to give Jess it and it was not going to be a present.  I managed to pick one up and I think it cost me around £15 posted. You can now pick them up in home bargains for about this price now I think.

If you do not know what a scuttlebug is basically a three wheeled balance bike. Which children up to around the age of 3 can use as a ride on. They push themselves against the floor and it moves it can be used both outdoors and indoors. If you have enough space which is something I do not have. Or you can use it outside like Jess does.

The scuttlebug comes in a range of different colours however, we choose the black and red one. Which means that I could always save this should we have another child.  The scuttlebug we have is actually shaped and looks like a ladybird which is attractive and colourful to a child’s eyes.
It came folded away which means that you have to assemble the bike but it is very easy. It does not take a long time it is literally 3 clicks and then it is up. This is amazing because as we all know children do not like waiting for a long time to be able to play with their toys. Something which I worried about when I had seen these previously was about how sturdy they were. I can report after owning one for a while that they are very sturdy. They are also so lightweight which means you could carry them to the park . You could even fold these up and put it under the pram.  I have no concerns how long these are going to last. Jess has used this for a long time it is showing no signs of wear. I also love how small they fold because it means that it very easy to store. If like us you do not have the largest amount of space to put toys.
I do not know if I can imagine Jess playing on this next summer when she is nearly 3. I have a feeling that she may be a little bit too big for it . However, I know that she is taller than most children her age so this is something to take into consideration.
I think that it would be worth keeping your eyes open for when these are on offer. I do not think that they are fully worth the RRP of £30.  However, if you can get your hands on one of these cheaper I would recommend it. Personally, I think that they are worth around the £20 mark and have noticed Amazon does have them in certain colours for this price.
Have you purchased a Scuttlebug, If so what did you think of it?
Charlotte x