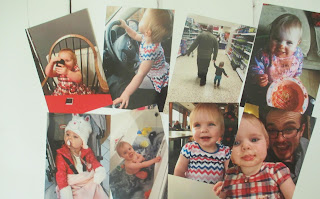 Taking pictures is something which I love to do since having Jess this is something which I have found myself doing more and more. However, they are all stored digitally either on my iphone or my computer but I find myself sometimes wishing I had more physical pictures of her which means that I can give them to people as gifts or as a reminder of times which people have spent with her. I will say now that this post is not sponsored this is just a company who I really love and wanted to share with you.
Not long after she was born I remember in a video by Emma  about an app which allowed you to print pictures which you get 45 free 6 x 4 pictures per month you only have to pay the postage which is something I can deal with. The app is called Free Prints I know it is available on Apple devices it maybe on android as well unfortunate I do not own one of these devices to have a look. The app notifies you at the end of the month that you have so many free pictures to use but you do not have to do it every month. I have done it a handful of times since Jess has been born.
The photographs are of such high quality I must say that I have never been disappointed by any of the quality that I have received which for me is a really good thing as I hate bad quality. The app even tells you if the picture when you upload it is not of high enough quality I have found that it may tell me this if I have used snapchat or a poor camera to take the picture. So this is something to be aware of if you take a lot of pictures using these kind of apps or a really old less quality apple device.
I have used this app and managed to fill a photo album which Jess got for her first christmas as well as make a couple of gifts including a scrapbook which I made for her Nanny for her birthday which I personalised of Jess’s first year of life. Let me know if you would like a post all about that in the future as this is something I could share with you.
The photographs can be changed to an different size from 6 x 4 an the app does tell you how much it is to upgrade which means that there is no hidden costs. They come within a week which is pretty fast but again you have the option to upgrade in order for them to come faster when you do receive them they come in a photograph wallet like you used to receive them when you send the film off the processes. Who else remembers having to do that?
Do you print your photographs?
Charlotte x