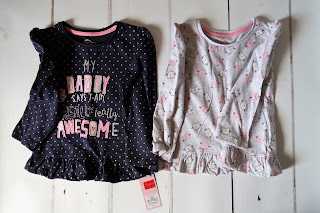 Primark is a store which we all think of been cheap anyway which as I have said in the past means that it is great for toddler clothing because you do not really mind should it become ruined by something such as paint which will not end up washing out. This month actually see’s Jess move upstairs at nursury which means she will be painting more and there is more chance of her ruining outfits. With this in mind and the fact that the weather currently is pretty hit and miss I popped into primark little did I know they had a sale on. I picked these two tshirts which are long sleeved great for the colder weather we will be having for only £2. I love the cat print on this because Jess really likes animals so this cat will really suit her. The other one which came in the set was this my daddy says I am really really awsome which I am sure he would say. These are going to be great teamed with leggings on a cooler day and then for £2 I do not mind if Jess hardly wears them.

The next item which I picked up may seem really random for a haul in August all I can say is they must have been selling some of there old stock off because it is this sweatshirt in grey which says Daddy’s Girl. It is pretty thick meaning it is going to be great when you need just something on to keep your arms warm but something easy to remove when it becomes warmer. I think this was only £1. I can imagining teaming this with some bright leggings due to the fact that the sweatshirt is not a very bright colour. For sure nobody can deny that Jess is a Daddy’s Girl she still shouts for him at least daily and he has now been gone 3 whole months it is safe to say she has not forgotten about him one bit. I think she is actually proud to be a little daddy’s girl.

The next item I picked up was thse twin pack of dress’s as you might know I think I have spoken about them in the past Jess has some amazing Minnie mouse swing dress’s which were from Primark however, they are now starting to get a little bit small for her but they have washed amazing. So when I saw that these two were reduced to £3 I coud not leave them. The pink one has like a navy heart pattern all over and the navy one has a pink pattern all over it. .These are going to be great for nursury because she can at the moment wear them bare legged and then when it becomes a little bit colder they can be paired with tights. I hope that these are going to get as much love as the Minnie ones.

Stop the press I managed to pick this tshirt up for only 50p so this for sure is one which I do not mind if it gets ruined about the first time that she wears it. I know that this one for sure is going to be used for nursury no doubt with some patterned leggings because I seem to love them. This top is a really nice shade of pik and in the heart it says I love Daddy which I know she is going to love because of the fact that she really does love him. I think he might actually get a big head if he reads this post because it shows how much she does love him. Does anyone else wish that they could get a tshirt for this price in their own size?

The final item in this little sale haul is this black/navy summer dress which for some reason was reduced to only £3 and it still is the height of summer. If you didn’t know I don’t think you would know it was from Primark I think it looks a little bit more expensive. I can see Jess wearing this should there be any family occasion coming up and I don’t want her to ruin a dress which may have cost a lot more than this. In the summer she can wear it bare legged of course and then when the weather starts to changed and it becomes a bit colder it is one which I could team with a cardigan and tights and then she will still be able to get plenty of wear out of it.
Have you picked up any bargin’s recently?
Charlotte x