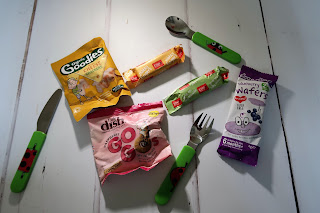 With the summer nearly over now I thought I would share with you some of our favouite toddler snacks because we all know that after a long day exploring there is something nothing better than been able to give your whining toddler a snack to tide them along till the next meal. This is something which we have had to do a number of times this summer because we have been exploring and that sometimes means that meals times do get pushed backwards.

Toddler snacks are not something new to us we have been using them since we started weaning of course we do try and use things like fruit as snacks but sometimes when you are always on the go like we see to be. We have to resort to snacks which come in packs which can be easy put into bags and had when someone is about to have a temper tantrum.

We really love the brand Organix we have used them since day one and have found that the bags which they come in are a perfect size which means they do not spoil a meal should they have them close to the time you may be eating. They have no nasties in them which is always a positive because if you are like me you do not want to pump your child with food which will not be good for them and send them super hyper. As you can see from the picture we love the crackers we also love the gingerbread men which they do carrot sticks, tomato crosses and they also do an amazing flapjack style bar. Can you tell that they are one of our favourite brands they are a name which we have come to trust and if we are out and about and we have no snacks with us and Jess needs something we would try and head in a shop and get an Organix snack.

Little Dish are a new company to us I think we tried them first around Easter time when we have been travelling. Jess had tried the Go Go biscuits which are wholegain, oats, flax and chai seeds biscuits. Which means that there is no rubbish in them which again is something which we love these are some snacks which I will admit I have actually tried myself and thought these were tasty. They come in a pack of 5 which means that you can always have some spare in the cupboards and they are individually wrapped so can pop them in the bag very easy. We have only tried the coconut and raspberry ones I need to keep my eyes out for the other ones because I am sure Jess will love them.

Ella’s Kitchen are another brand which we love as well if you haven’t heard of them they are another company who do not like to put naties in food and are very proud of that fact. Jess has not tried a lot from their snack range I think she has tried some of the crisps which she demolished which must mean that she actually likes them. However, the product that I really recommend is the nibbly fingers which are also like a flapjack treat which is great because I like that they are small which means Jess can actually hold them which is a problem with some of the larger snack she can not get her little hands around them. I would recommend Ella’s Kitchen as you may remember I reviewed their cereal a while back.

The final brand which we love is Kiddylicous who make the most amazing wafers for sure these are something which we repurchase time and time again. The ones which Jess seems to love the most is the blueberry ones. Inside the pack you get two wafers which means that you can always give your child one now and then give them one at another stage during the day. They can easily be broken down which means that you child doesn’t have to hold the whole wafer and make it very sticky and it also saves it been dropped and another tantrum occurring which is the last thing we all want.

What are toddler’s favouite snack?