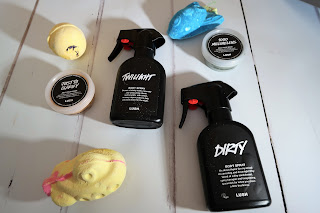 Recently I visited Lush which is not a rare occurrence for because I usually visit the store at least once a week, however, I have not been in that much since Joe left because I have had to purchase everything for Jess and I did not want to bankrupt myself as well as try and use some of the stash I have at the moment because the Halloween/ Christmas range are launched.

They have just discontinued some of my favourites in their annual summer cult which annoyed me a lot because it means that I had to stock up and while I was in stores I noticed that they had some new products out which as a Lushie I knew I had to purchase. A couple of the items which I purchased have been available in Oxford Street for a number of weeks now but as you know I live in the North around 2 1/2 hours by train away from London.

The first bath bomb which I picked up is cheer up buttercup which is the small yellow circle bath bomb at the top of the picture. This bath bomb is like sunshine which is going to be great because it brings a touch of summer and sunshine which we are all going to need soon because we are fastly approaching the autumn months. This bath bomb for sure smells like Lemon it just smells like pure Lemon and almost like lemon sherbet if you have ever used the refresher shower jelly it is almost like that.

Yellow Submarine is one which I am sure which you have to sing the Beatles actual song when you hear of this bath bomb and its name. This is one of my favourite bath bombs of the whole regular line collection at the moment I think because of the fact that it smells of orange and lemongrass it does have coconut in it as well which means this bath bomb does smell tropical I guess it makes me think of actual summer and holidays for some reason I think of cocktails on the beach when I smell this scent.

Rocket Science is one of the cheapest bath bomb which is priced only at £2.95 however, do not make the price make you think that it is going to be a poor bath bomb at all. I think it is going to be one which you will want to pick up as well. It has bergamot oil and lemon oil which is a couple of scents which you know I like if you have read my blog before. I would say this is one which does make a pretty show in the bath so it could be one to use with the children and it is very cheap as well compared to some of the other products lush do.

As you know if you have seen that Lush has made Jelly Facemasks and of course I could not go in and not pick them up because of the fact that they are different and I love things which are a little bit strange but sometimes these are the best kind of products. I picked up 1000 millhelens this is a very apple scented mask which has witch hazel to soothe and relieve irritated skin, green tea to detox and purify the pores, and kaolin clay to remove unwanted grease and dirt. This is something which I need because at the moment my skin is terrible and it is breaking out to the high heavens if I could hide at the moment I would.

The other jelly mask which I purchased was the was just to clarify is designed to brighten you skin and it also super rejuvenated and clean the skin which of course is something which I need while my skin is like this horrible and broken out The reason why you get these amazing results is due to the fact that there is enzymic papaya which is great for brightening, bamboo stems which exfoliate, grapefruit and bergamot which helps lift the mood as well as the fresh orange juice which is meant to help perk you up. The jelly facemasks are actually only £6.95 and I can imagine that they are going to last a while if I am honest I think I will get more use out of them that they fresh ones.

A final couple of items were body spray which who does not want to smell like Lush all of the time if they can. I picked up twilight which of course helps me sleep but it also makes me relaxed which is really good because I can struggle to calm down and because I know I am going to get more stressed with uni this year I think this is one which I had to pick up because the scent does last all day and who doesn’t love that the reason it keeps you relaxed is because it has lavender and tonka in as the main ingredient. This for sure is going to be one which I wear when I am at uni as well as when I just want to chill out this whole body spray only cost £20 which make sound expensive but the scent does last all day long and I think the bottle is going to last a fair while.

The other body spray which I picked up was Dirty which I know what you are thinking that sounds strange why would you want a body spray which is called dirty well I will tell you it is actually a mint scented product which is something that I adore because I do like nice fresh scents, however, the reason why I purchased this one was due to the fact that the Joe was using this shower gel just before he left and then this me and then this means when I am missing him it can spray this it does mean that I think that he is there and it means that I do not have to steal his hoodie because I am that annoying girlfriend who loves stealing the hoodies.

Have you tried any of the new releases in Lush?