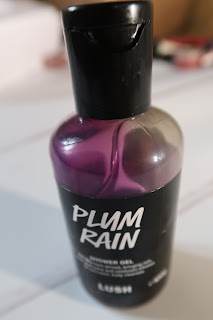 Recently it hit me that I had not tried Plum Rain in a long time which is shocking because as you know if you read my blog a lot I love Lush. Plum Rain came out in stores this year so it is the newest shower gel Lush have currently. I had already tried this because it had been released in there flagship Oxford street store.
The first thing which you notice when you see this shower gel is how vivid the purple the shower gel I can not remember a lot of shower gels which are actually purple and as some of you may know I do actually like this colour. This is one of the things which attracts me to this shower gel.
The scent of Plum Rain is one which is very unique and is not one which a has it own scent family at lush which I know is really common for Lush. Plum Rain has Umeboshi in which apparently translates into Japanese Salt Plum this is what gives it a sweet, salty and sour scent which I know sounds really crazy.  To me when I smell this scent I think of the freshness when it is a fresh crisp morning for some reason. However, when I use this in the shower I get a different scent however, this is not something which I can put my finger on. I will admit that on dry sniff this is not one of my favourite shower gels however, this can change when I am using it in the shower due to the scent change when it comes into contact with water.  Umeboshi is meant to help reduce the feelings of fatigue and supports the immune system to get body of coughs and colds; mandarin oil uses its citrus powers to brighten the skin and revive your senses, so it’s an well-rounded crowd pleaser. So this may be one which you want to use in the winter months.
This shower gel is very thick even thicker than some of Lush’s normal shower gels which as you is hard as a lot of them are very thick. It is also a shower which lathers very well which means that it is going to a long way. I think this little bottle actually ended up lasting me between 4-6 weeks which is amazing because I used it every single day and sometimes ended up using it twice a day.
Overall this is one shower gel which I would love to repurchase again in the future however, I do have a couple of 250g of shower gel in this scent so it is going to be one which will be seen in my shower again in the future.
Have you tried a Plum scented shower gel?
Charlotte x