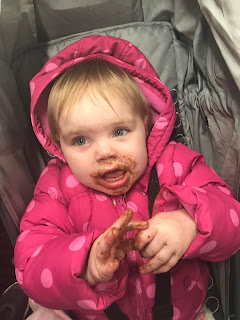 This week has been one of the toughest as my life as a parent this is because of the fact that Jess got sent home from Nursery on Monday and was not allowed to return and she was fine the next day, She got sent home and we got told we needed to get a doctors appointment for her because she was covered in a rash according to them. When we got her to see a doctor we found that she had an eye and ear infection as well a common cold and Chicken Pox. Yes, she was a walking infection as one of my friends described her.  This meant that she had to spend a bit of time with Daddy because of the fact I still had to attend my lectures but everyone else was at work and of course he is lucky to get time off when Jess is sick and need looking after.  Would you believe the fact this picture above is taken a day after she got this diagnosis she does look a little poorly but I think in total she managed to get about 5 spots so we are unsure if it was actually chicken pox or if it was a viral infection. 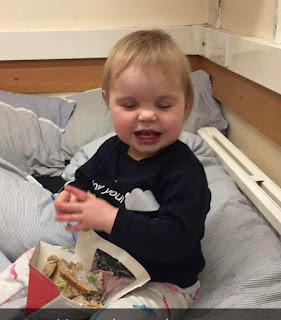 This is an amazing picture which Joe managed to take this is Jess having a picnic on his bed during the time when they were spending together. This girl loves her food like you might have seen in some of these in the past few weeks. I am sure that she was having a ball and she has her eyes closed because she was laughing way too hard because this is something which she would be doing I know her so well. I was sent this with the caption I am supposed to be ill Mummy. This has become a bit of a standard joke this week because she has not been that poorly. She did have to have 5 medicines to take which she took like such a big girl which is something I am so proud of her as it was the first time she has ever had to have eye drops and they didn’t look like fun. 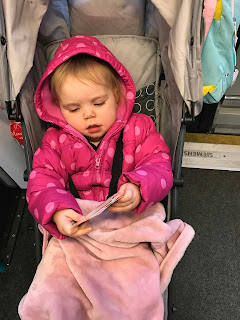 The final picture which I am going to share this week is this one of Jess again on a train and this is her playing with train tickets. You may notice that she seems so relaxed I am amazed how relaxed this girl is when travelling. If you have ever travelled on a train with children you know it is not easy sometimes let alone when you are poorly and there are train delays which meant you had to sit in the doorway of a cold train and change at a station which you don’t usually go to.She was so amazing I am so proud of her. She does so well and I never tell her how proud I am because I don’t know how many little girls would be so happy getting on a train before 7am.

What have you done this week? 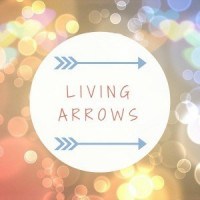 One thought on “Living Arrows #5- Week of Fake Pox”