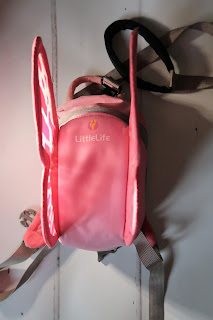 Ever since Jess had started to crawl I said at when she started walking would be purchasing her a reins backpack .The one we chose was a littelife daysack.  The reason behind this is because it still allows her to be independent. If you know Jess you will know how independent she is. Even nursery have commented on this. So Jess thinks that she is actually walking and been a big girl.  Without having to hold my hand unless she is crossing a road. Plus I can still control her which means that she can not run into the road or get into danger.

I remember around November time when Jess had started walking and started to want to go explore more.  I purchased her the Littlelife daysack. This is the one which I had my eye on and had been researching. They do as range of different animals so there will be one which suit your family. They now even do character ones I have seen the gruffolo and Minnie Mouse. In hind site I kind of wish I had got the Minnie one because Jess has become obsessed in the last few months.  The Daysacks have the removable rein which means when Jess is a little bit older we can use it as a small backpack.  It has enough room in for a drink a few other things such as nappy and snacks.

You can also adjust the chest pads which means as Jess grows the bag will still fit her.  I think it is till age 4 you can use this little bag however I am sure a lot of that would be just using it as a normal bag. The shoulder pads are actually pretty thick and soft which means that it is comfortable for your child to wear. Which is something that you want should they be wearing this for a long period for of time. 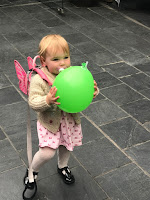 I have used this bag so much I have purchased a similar one for the car.  So that we always have one should we need to take last minute journey and do not have this one Jess is still able to walk.  We have used this bag in a number of places from the town centre, parks, seaside and farms. At all of them we have never found that we have had an issue with the bag. We even took her to the rugby at Easter with it and the security were amazed with it. They said I looked like I was controlling a drunk person.
It is not just me who has used the bag obviously Joe has used it with her and both sets of grandparents. It was his nan though who could be a little bit sceptical about things like this.  As she is used to doing what they did back in the day when she was bringing children up.  She even stated that they are a good idea and she wishes that they had them when Joe had been growing up.
The bag is something which I could not be without now because we get so much use out of it. I think this most be one of the best £20 I have ever spent.
Do you have one of these bags, would you use one? Let me know in the comments
Charlotte x