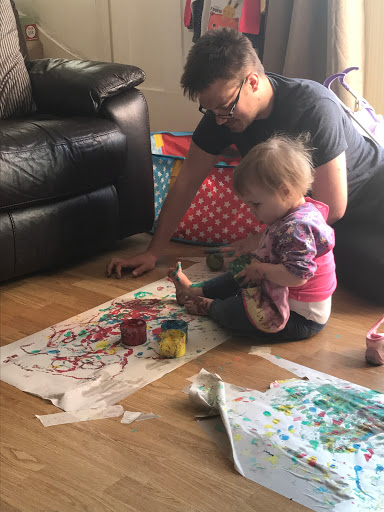 If anyone has a toddler like mine who loves to play outside. You will know how hard it is to keep them entertained when they are unable to  get outside because it is raining outside. Jess for one really hates been inside. There is only so many cartoons she can watch on the tv before she starts to her really bored and she doesn’t have the attention span yet to be able to watch films.

Since the weather this summer seems to have been really hit and miss one day she will be able to go outside and enjoy the sun and the next day it will be horrible and have to be a day in. At the moment she is going to nursery around 3 days a week which is great and really handy should the weather be really rubbish them days as nursery can keep her entertained . However, on the days that it is horrible I have had to become creative and have some ideas of what to do because we can not be running to soft play like everyone else because those places give mummy a headache and are also bad for her bank balance.

Due to the fact that Jess is hardly in it does mean that some days she will be very content just playing with her toys because they are all new again to her and ones which she might not have played with for a while. I recommend rotating your child’s toys around every couple of months so that they get to play with everything and it doesn’t always mean you have to fork out for new toys.

Having fun with paints is something which we have done as well. A while ago I think it might have actually been way back at Easter time we popped to Asda and they had large rolls of paper for around £1 and also had some finger paints reduced due to a battered box. We decided that we would tape the paper to the floor so that did not end up moving and Jess ending up painting all over the floor. I would recommend getting some paints and some coloured pencils because it helps children become so creative and i know it is something which keeps Jess occupied for a long time on a rainy day. 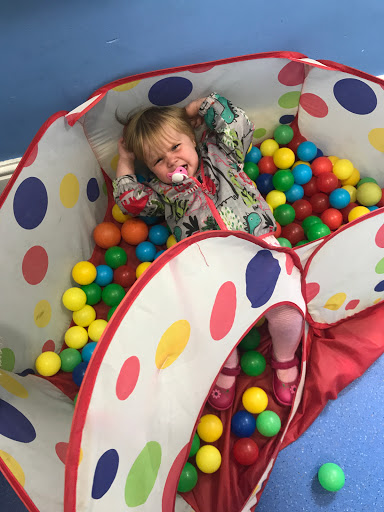 Yes this picture is from nursery and I promise she was not crying because she was in the ball pit she just didn’t want to leave nursery. Jess is lucky to have a ball pool at her nannys unfortunately currently we don’t have the room for her to have one at our house which is a shame because she loves playing it in so much. She will pick the balls up and tell you the colours of the balls as well as playing pass with you and having a whale of a time. You can pick ball pools up for around the £10 mark and then it is just getting the balls I would recommend around 100-200 for the chad valley one that is the one which she has at the grandparents house.

Blowing bubbles is another fun thing to do if it raining sometimes we will blow them in the house and sometimes when Jess has a bath. There is nothing more that she loves that to chase them and help try and pop bubbles. I managed to pick this huge litre bottle of mixture from the works which is not a place I would normally have thought to visit looking for bubble mixture.  I recommend looking in stores such as this home bargains , B&M and such for cheap toys and activities. I must admit I am always keeping my eye out in these kind of stores for things to keep Jess busy.

Speaking of baths sometimes we have a lot of fun when it’s raining by treating her to a lush bath bomb and then getting her bath toys out . I have known her stay in the bath for up to an hour and half which then makes her so tired and she has to go for a nap which means that she is entertained for even longer. Sometimes we do not even use lush we use her normal bubble bath because we keep lush for a treat.

What do you do to keep your toddler entertained when the weather is rubbish?