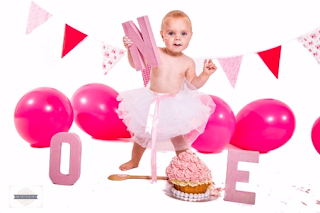 I thought to day I would share with you what we did for Jess’s first birthday due to the fact that I know it can be hard to know what to do for you little ones first birthday because they don’t remember so you don’t want to spend to much money but then you do not want it to go past unmarked.

The weekend before Jess’s actual birthday we went to see Daddy’s family so they could celebrate her birthday with her which was nice for them to be able to see her. The day started with them giving her cards and some presents which we let her open early so they felt part of her birthday celebration. Them we went for a nice walk by the canal to go to the a pub for a lunch however they were only serving Sunday lunch when we got there and we did not fancy it so we walked back and then we had tea when we got back .

On her actual birthday I had to pop into university so it meant that she had to spend the morning in nursery which is something I am sure she did not mind due to the fact that she seems to have settled in so well she even cries when I go and pick her up now.  She might have only been at her nursery for a week but they did actually make her a birthday card which had a picture of her in it this was something which I found super cute. 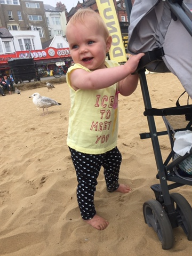 In the morning it was really foggy however around lunchtime in York the sun had decided that it was going to break through which mean that we could take Jess to the beach like we had actually promised. We decided that we would jump in the car and drive an hour to Scarborough were we would go on the beach have a walk and then we would go and get some tea. However when we ended up getting to Scarborough it was really misty there and really cold we had to put jackets on. We did end up going on the beach however you could only just see the sea. However this did not stop Jess walking and playing on the sand this girl at the moment doesn’t seem to be able to get enough of sand after she played with it at nursery the other day. It was not super warm so it meant we only spent around 15 minutes on the beach before we all became cold and needed to come off.  This is when we went in the amusements to kill a little bit of time however Mummy decided to leave her purse in the car so this meant this was very short lived as well. Due to the fact that it was so cold we decided we needed to go to Costa and get a hot chocolate to warm up this was when we decided we had enough of the cold and then drove closer to home for a pub tea which would have been so nice if I had not been so ill. Then we open her present with her when we finally got home. I am going to post what she got for her birthday on Friday hopefully.

Then on Sunday Jess had a cake smash which we had done at a local photographers study which was really fun. They provided the cake and the outfit so this meant that I did not have to worry about having to source a big cupcake. I choose pink for the colour of the cake and then she had a white tutu outfit which was adoreable. Jess was posing before the shoot because she really does love the camera then when she got the cake she was not too sure of it at the start due to the fact it was so big. Once she started playing with the icing she ended up covered in it as well as eating parts of the cake which was amazing because she did eat as well as play. The cake smash was supposed to be an hour long but the photographer really loved taking shots of Jess and she kept getting second wind when we thought that she has finished.  I really can not wait to see all the pictures on the disk when I get them in  3/4 weeks time. If you are thinking about doing a cake smash this is something which I would really recommend.

What did you do for your child’s first birthday?