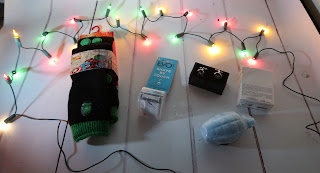 I am all for stockings I think sometimes the small useful presents mean a lot of more than huge items which for some people might think is very strange but that is just me. Today I am going to share with you a few ideas which I have on what you could stuff in guys stocking this festive season.

What would Christmas be without getting socks I am sure man gets socks over the festive period. These are a pair which I love and these are from heat warmers which have these grips on the bottom which means that you can grip to flooring such as laminate flooring because I know how easy it is to slide on that type of flooring. These are actually the Hulk one which would mean that they would be perfect for any kind of Marvel fan I know that they do actually do them in most of the Avenger’s characters. I think these would be great for people who have cold feet a lot because for sure these are thick. Of course, you could buy them socks which is their preference

.
Bath bombs might be something which you think of girls instead I know a number of males who do actually use them. Due to the rising trend of males actually using them they now do once a which are a lot masculine than those you used to be able to get. For example, the bomb cosmetics do this one which as you can see is the shape of a grenade and this one does actually smell like it is a scent which lynx could use it is that nice. I am so tempted to use this one very soon because I am sure I would get a lot more love out of it than the males I have in my life. I know lush do some amazing bath bombs as well and they start at £3.50 so do not have to break the bank however if you are wanting to save a little bit bomb cosmetics ones are usually a little bit cheaper. 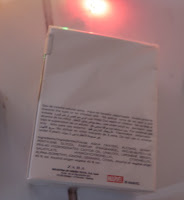 A fragrance is something which does not have to be super expensive. Depending on what the man in your life your purchasing for likes, for example, I know some men do not likes ones could be classed as too Floral. Fragrance is not really something which I have purchased for many people in the past however, I have purchased a few this year due to the novelty element for example I know a few weeks back that Zara has some captain America fragrances and someone pretty close to me loves the Marvel films which meant that I could not resist purchasing. I had a quick sniff of it and I feel like it is one which could be used every single day and it was very cheap I feel like it was only a maximum of £5. Which means that it could be great for teenage boys as well it doesn’t have to be the adults always having the fun.

Cufflinks are something which I feel like every man needs to own a lovely pair of but due to the fact that people that most people do not actually wear them frequently. If you have a car nut in the family like I do you might want to check out gears cufflinks I feel like they are very stylish and are not super tacky. These ones which I found were only £4.99 which I feel like is a gift which could be great for a secret Santa as well. These ones are of great quality as well which means that they are not going to break when you used it at them the first time.

Other ideas which you could use for male stockings such as:
Sweets
Toiletries
Accessories such as belts
Wallets

What are you going to put in the male in your life in your stocking?