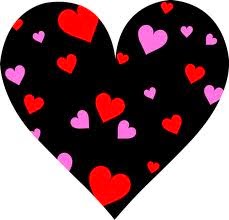 Hey Guys
I am taking part in elledeeswednesdees which is a fortnighty series where we get given a topic to write a post about. This post should have gone up two weeks which is why you are going to see two hopefully both will go up today.
The topic given for this post was Love I was going to post the products that I have been loving but then realised that there was not many due to the fact that I am revising for my exams meaning I have not been applying makeup due to only leaving go the library.
I decided to make this post a more of a personal one you have been warned guys you may need a sick bucket. A few years ago now I started speaking to a guy online and we built a friendship from this we swap mobile numbers and just kept chatting as friends. He is in the army so they was a period last year were we would have weeks without speaking but when we could we would have such as laugh on Facebook.
When he came back we spoke a like we had been and got to know each other a lot better this is when I would say we became more than just normal friends who had met off them internet. I moved to uni and this when we became even closer due to the fact that I was now missing my friends and family who I used to see all of the time and now I hardly saw them once ever 6/7 weeks and due to the fact that he was used to been away he helped me get through it. Everyone gets home sick when they move to uni so talking to my housemates wouldn’t really have helped me get through it.
Since I recieved some really bad news in March which I was not meant to find out until I returned home for easter we have spoken every day usually using Imessage or something simular. He has helped me get through a lot and this is something I am so glad for and now we are almost classing seeing each other. Hopefully when he goes away next month for 2 months we will cope with the distance with me been in Yorkshire and him in CA but at leastr I know it is not for long and I have something to look forward to when he comes back because if I don’t see him when he is back I knoiw he is coming to my uni for the end of freshers which means I will get to spend some quailty time with him.
Have you been in love with someone in the army or in a long distance realtionship.
Charlotte x