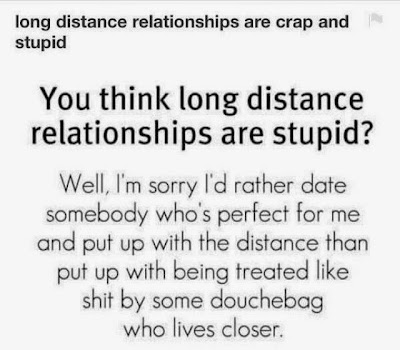 Hey Guys
It has now got to the time of year where lots of my friends are going to uni  again this then make for the status of people breaking up because they feel like they can’t do long distance relationships without feeling like they are going to cheat to each other. I know that people hate been apart from there other half and temptation is always around you even more so when you are at uni and there is alcohol thrown in and peer pressure which people say is not there but we all know that it happens.
I have had people tell me that they don’t know how I do it. My boyfriend is in the army so this means that I don’t get to see him every day or every weekend currently he is based around 2 hours away from my uni which is closer than he was in my first year when it was a whooping 5 hours from me which meant that it was hardly worth coming up because he would get to mine at like 9pm on a Friday and be leaving again on the Sunday around lunch but all the time we did spend together was made even more special because I didn’t get the romantic nights in and all the things which other “normal” couples do. Now he is only 2 hours always from my uni which means that it is going to be easier for him to come up to see me and also when I have time were I don’t need to be at uni on the weekend I can go down and see him.I don’t know how much this will happen at all but a girl can hope right?
I know if I wanted to I could try and get with into a relationship with someone who was at the same university as me which would allow me to see them every time that I wanted. For me though what is the point of been in a relationship if you are just in it for the convenience like who is always there for you when you need something but also treated you like you are nothing and cheat on you or is not treating you like a princess like guys should.
I know this blog post is random and properly doesn’t make any sense but thank you for reading.
Charlotte x