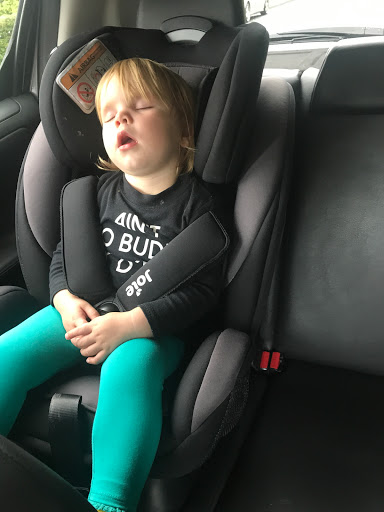 Dear Dada
Let’s Just take a moment to show appropriate how cute I actually look on this picture I was fast asleep and I might have been dreaming about you who knows well maybe I was if you was actually lucky. This week has been another crazy one I think one week I am going to write one of these and actually tell you that we have done nothing I wonder if that is every going to happen I doubt it to be honest.
Monday saw mummy have an eye test which meant that I had to stay at home with Uncle Daniel because we thought it would be easier for us all. She told me that she actually past her eye test and did not have to pay for any more glasses which is always good. I thinks he might actually order some sunglasses soon though because she actually needs some and still doesn’t own any. We ended up having a bit more of a sort out which means that she found more clothes which she can sell because I have started to grow which means I am going to need some new clothes soon woo.
Tuesday, Wednesday and Thursday were actually nursery days for me and this week actually saw me become the oldest downstairs because all of my friends have gone upstairs because it is there second birthday’s this weekend. I can not believe that it is not going to be long until I am 2 I am sure that you are going to have some amazing presents and memories for me because I trust you so much. I have been playing outsider a lot and painting and making pictures when the weather has not been good because I have become such a big girl recently. I have been told next month is actually when they will be looking at moving me upstairs can you believe a year ago I was a little girl who was scared of getting off the chair at nursery and now I am so confident.
Friday well don’t get mummy started saw her see Jess Glyne at York Races because she was working the music she has told me was amazing and actually someone who can play really well live however, she ended up drenched because it did not stop raining from between 4pm till around 9pm. This meant that she got drenched I know her hoodie and leggings not dried the next day when she was going back to York. Even her converse were drenched but because they already had holes in this was the final nail in their coffin and she ended up recycling them. I know she loves them and already has a brand new pair which she can were now.
She managed to find some dry clothes and headed back to York I swear she should have just moved there this weekend this time it was the races and All Saints. I think she was more bothered about the rugby than the races though because of the fact it was the semi final which meant she could not watch it and had to follow the game on twitter. I think it was a bit nervous for her but at least they managed and it means that she gets a trip to Wembley. Woo another weekend with Nanny and Grandad while she goes.
Today see’s Uncle Daniel and Grandad leave us for a week because they have gone on holiday to Tenerife the lucky boys. Hopefully we will end up going on holiday next year because I think Mummy really needs a holiday hint hint Daddy. Me and Mummy are going to spend a week at home which is going to fun because it means that we will be able to play with my toys and then sort out a lot of other things as well.
We miss you so much Daddy
Love you Jess xxxxxx