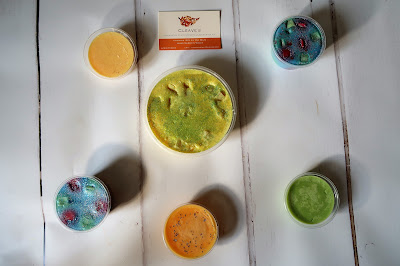 Lush and candles if you have read my blog in the past you will know is two things which I adore so over a year ago when I found a little company who did lush scents in wax tart form I was all over it. I knew that I would be purchasing more and more from them that company is Cleeve Candles. They are a store which can be found on etsy and at the moment are only selling one day a month on what they call restock day to find out when the next one is you will have to visit their site, however, I can tell you it will be towards the end of September now.

These are items which I managed to pick up in the restock night back in June I meant to share these with you before however, have just not got round to it which seems to be the story of my blog at the moment and for that I apologise. The first item which I picked up was this huge pie which is a blend of 3 of lushies ultimate fragrance which if I remember correctly is 29 high street, calacas and snow twilight which if you know me is a few of my favourite scents from the company. I am going to be ableto break this huge pie into a lot of different pieces which means that I am going to get a lot of burning time into my wax burner. I think a huge pie like this is around the £11 mark I may be a little bit wrong.

In the summer months is there anything better than the smell of suncream been applied well I do not think so this was one of the reasons behind me purchasing this wax. I think it is one which I am going to adore burning when the weather is been typically British and not that warm even though it is summer. On dry sniff it smells a little bit different to what I thought it was going to but hopefully when I actually end up burning a chunk of this I will like it if not I will end up selling it on so that someone else can get the joy out of this wax.

One of my favourite scents from Lush is Calcas which is a scent which was out a few halloween’s ago now it is the scent of monster ball for anyone who may have tried that last year. I adore this scent and could not think of anything better than my whole house smelling of the scent the only way I can kind of describe this is sour gummy worms if you are fan of these sweets then maybe this one if for you. I have a few tubs of this because I love the scent so much and they are not available every single destash night. I can not wait for the weather to change a little bit so I can start burning wax more and more.

Lime cooler is one which I thought I would pick up as well due to the fact that you do not see much wax which is a lime scented at all. I love lime for some reason the name of this makes me think of Costa maybe because a lot of their cool drinks are called coolers. You can sure tell when you get this that there is a hell of a lot of lime in it almost makes me want to eat it even though I know that would be a stupid idea and no doubt very dangerous. I think this is going to be one which I am going to burn when I am missing the summer rather than one I am going to burn right now give it a couple of weeks to a month and I can see this been one which I am burning. For some reason, I have managed to already lose the picture of this which is never good and I already have started to burn this.

Mango and Pineapples are a couple of fruits which I love to consume in the summer months so when I saw that Cleeves was doing a blend of them in wax tart form I knew I had to have some. If a couple of fruits scream summer to me more than these I do not know what it is. I can smell more mango than I can pineapple but this is not something which bothers me at all. I think that the blend is not too overpowering like some of the other companies which I have tried. This for sure is one which I am going to be burning in the near future.

My favourite I think I am going to claim from the whole of my haul is this little wax melt which is Slushie yes it is based on the blue raspberry slush puppy’s that you used to be able to get when I was a growing up. I am unsure if you can still purchase them now I don’t think I have seen them in a while. This smells just spot on I can not believe how much even on dry sniff I thought it smelt like this. It almost makes me want to hunt down a slush right now because they smell that amazing, Even Jess keeps stealing this sniffing it and going nice so it much is a firm favourite. This is going to be one which was soon as my tart burner has some room I am going to be burning. Just look how pretty it is how could anyone say no.

Have you tried Cleeve Candles? Could you recommend any other companies who make so amazing wax tarts?