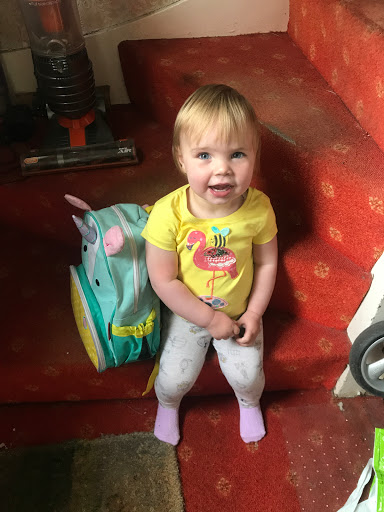 As I am sure many of you know if you have read my blog previously Jess goes to nursery full time and has done since September.  She was a year old when she actually went into childcare. She did not go earlier was because I had to wait for the start of the next academic year to continue my studies. I made the choice after Jess was born that I wanted to return back to university to finish my degree.  At this stage, I had already completed 2 years. I think I was 3 weeks from returning to complete my final year when Jess was born.  If you don’t know we were thinking about getting her adopted.  It was not until I saw her for the first time I realised that I could no longer do it.

It was about this time last year when I heard back from York St John. Telling me that I had a place there to complete the rest of my degree. I transferred from Chester as there was no way I could look after a one-year-old with no support from my family while I would be in the final year. Hull was the ideal option for me as I do not live that far from the campus. However, they told me I would have to start again completely and do all 3 years where York St John told me that I could just do two years and graduate. Then came the problem that then occurred was York St Johns unlike some universities, did not have a nursery. Which Jess could attend which mean that I had to research where Jess would be going when I had lectures.

The first issue did I have her in a nursery in Hull or York. I could have had her at a nursery in Hull. Which would have meant that Jess would not have to commute with me every single day.  However, if I had a 9 am lecture it means I have to get the train at 7 am and nurseries do not open before 7 am. This would have meant my mum would have had to drop her.  Also, should Jess become ill it meant that I would have to leave university. Then I would have to travel an hour home before I could pick her up this is not something I would have wanted. Looking back and seeing how many times she has been sent home since starting I think she has been sent home around 3 times.  Which could have caused problems should she have been based in Hull.

When I decided that she was going to have to commute to York with me. This meant me googling nursery because I had no clue where the nurseries where and I needed them in the city center. This was because I needed to be able to drop Jess off easily. I was not going to be driving which means the location was key for me.

This is something I would recommend to make sure that that the location of the nursery works for you. Do you want it to be on the route to your workplace or closer to home? Make sure that the opening times work for you. Some do open around 7 however, the majority which we found was it was around 8am. Will you be able to pick up your child should there be unwell or will it be your partner? This is something which you may want to think about are you both going to be able to get there. Look for me at the time Joe was based in York. This means that he could pick her up should he need to. I remember at one stage he had to have her while I had lectures and Jess had chicken pox.

This is something which I had not taken into consideration before I was looking at nursery places for Jess. Some have huge waiting lists for places more so when you are looking for a place in the baby room which is usually up to the age of 2. I think we found some of the nurseries with waiting lists of 6 months. After speaking to some people we found that there is some nurseries which have children on there waiting lists who are not born yet. This is something which you may want to plan for. After all you do not want to need a nursery place to find out there is not one. This is something to take into account. You may want to think about 6 months before you are going back to work.

When we moved house and ended up changing nurseries for Jess. We found that the local nursery did actually have a space without a waiting list. This could have been because she was 3 at the time. This also could be due to the fact we moved from York to a smaller town. So there may not be as many children needing mursery places.

I found two nurseries which would have been suitable locations. I would recommend going to visit them because you can a feel of the nursery. Make sure to visit when the children are in as you can see how it is every single day. By visiting them we found that we liked one a lot more than the other.

Since in nursery she is in the under 2’s room one nursery they are actually allowed to go and play in their outside session.  Whereas at the other nursery they did not have an outdoor section which means they had to take them on walks to get fresh air. They were not available to play out.  Being able to go outside is something which Jess now loves as you know so this is a huge benefit she can play out. Are the children able to play with toys which they choose. Or do the staff choose which toys they play with. We wanted to make sure that Jess was going to play with a range of toys including ones which we do not have at home.

Another factor that put me off the other nursery which we did not choose was that the under 2’s would have been upstairs.  Which for some of you may not seem a huge issue but when you do not have a lot of time in the morning.  The last thing you want to have to do is go to another room which is full of children.

Also, they did not have a separate sleep room . Which meant that when the nursery put them down to sleep it was basically like putting them on yoga mats. Where as the other one had converted a room in the afternoon to naps. This is great if you still have a young child who needs naps.  I love that Jess has a variety of rooms to play in and I always find her in a different one. The staff at the nursery are amazing and help so much.  Like they even said to me that if I didn’t want her to make a Father’s Day card with Joe been away she could just do a picture.

Another thing which swung it for us is the fact that she actually gets her meals included in the price of a day. This may  sound really stupid to some people . However, when you are paying around the £45 mark this is something which we wanted to be included. This did mean that there was going to be another £2 for food per day. After all this was all going to add up. So this is something which we did not want to have to pay as over a month this is another £40. This is worth checking because we have had two different nurseries with different structures.

I know when Jess got the funding from the goverment we had to pay for food.  For us both of the nurseries which we looked are were going to include wipes. We have to provide the nappies and any cream which we want to use on Jess. We also have to provide suncream in the summer months as well.

Now of course, we have Troy who is in cloth nappies we need to make sure that they are happy to use them. As this is something which we do not want to stop using. I am hoping that when the time comes for him to start fingers crossed we find one somewhere which are on board with this.

Hopefully, this post is helped you if you are looking for a nursery to send your little one. These are just some things that helped me decide which nursery we sent Jess to. I love our nursery so if your looking for one in the York area let me know I will share which it is

Do you have any tips for helping choose a nursery?