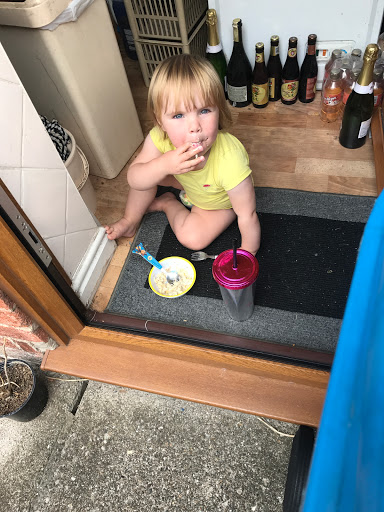 If you have ever seen a picture of Jess or read my blog you will know since she has been born she has had had a dummy. This was not a choice I was actually given because of the circumstances and how ill I was shortly after having her she was actually in NICU. It was there that the lovely nurses decided to give her a dummy because they didn’t know if she had reflex and there decided to give her a dummy to help.

However, since Daddy left way back in May we had just made that she was becoming a bigger girl and she only needed it when she was tired and needed to go to sleep. This was the first stage of weaning her off the dummy because I didn’t want her to be a child who was addicted and wouldn’t stop. Since then she has only been using it for bed and when she has been traveling on trains because usually she is tired as we travel early morning and towards bedtime.

This is something which I would recommend instead of going cold turkey with is to cut it to certain times when you think they need it the most it seemed to work for us. However, one day back in July Jess decided that she was going to throw her dummy this was usually me hunting for it on the train, however, this day we managed to lose it. This meant that Jess had to go to nursery without a dummy and they didn’t give her a spare for the first time which Jess did not mind. She has been taking it out and putting it on the side when she has been playing so this proved to us that she did not actually need when she was there and was kept busy whether it be with other children or the workers in the room.

I took this as a sign that she was ready to stop having a dummy full stop and since that day I have not given her one. I believe that children tell you when they are ready and because we want to keep them small for a long as we can we do not want to push them to have no dummy. Since that day there is only one occasion where I cracked and that was because she was actually poorly. When she now asked for her dummy we say haven’t the birds taken it so they can look after there little ones and then she no longer wants a dummy as she thinks of babies with them.

How did you get your little one to stop using a dummy?