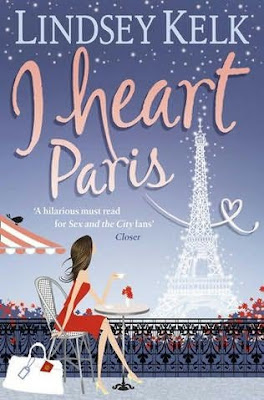 Hi Guys
Due to the fact that I had finished the book I Heart Hollywood last week I decided that I would read the next one in the series and this is the next one called I Heart Paris.
Blurb
Angela is in the city of love — but romance is taking a nose-dive! When Angela Clark’s boyfriend Alex suggests a trip to Paris at the same time as hip fashion mag Belle asks her to write a piece, she jumps at the chance. But even as she’s falling for the joie de vivre of Paris, someone’s conspiring to sabotage her big break. And when she spots Alex having a tete-a-tete with his ex in a local bar, Angela’s dreams of Parisian passion all start crashing down around her. With London and her old life only a train journey away, Angela can’t decide if should stay and face the music or run away home
My Review
I heart Lindsey Kelk. The third book from I Heart Series is  not a disappointment. This book has left me giggling at some scene and grinning like an idiot.

I love how Lindsey Kelk writes what’s been going through Angela’s mind. You could see that Angela was a fun and a bit crazy at times. That crazy part might be something in common that Angela and I share. I think that Angela was lucky that she seemed to stumble into good people when she went to another new place. First, she got Jenny in I Heart New York. In Paris, Angela got Alain, another helpful concierge. Angela seemed to think that everyone around her is nice. I wonder what would happen when she met with a mug or something…. I love the crisis that Angela was facing and that not every crisis she faced had a good ending. It makes the story even more realistic. Overall, this is a fun, light read.I’m excited to read I Heart London next.

If you read this book what did you think
Charlotte x