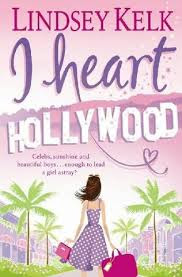 This week I have been reading a lot because I want to get through some of the books which I own which means that I can purchase even more from the charity shops and help them which is something I like to do. So this is the first book which I decided that I would read

The BlurbCelebs, sunshine and beautiful boys…enough to lead a girl astray? Angela Clark can’t believe her luck! she’s an English girl living in New York with a dream job at hip magazine The Look and a sexy boyfriend. Her latest assignment takes her to Hollywood to interview hot actor and fellow Brit James Jacobs.Thrown in at the deep end she heads west with best friend Jenny dreaming of Rodeo Drive and Malibu beach. Soon Angela discovers that celebrity life in Hollywood is not all glamour, gloss and sunshine. Despite his lady-killer reputation, the only person who seems genuine is James. Then a paparazzi snaps them in an uncompromising position and suddenly Angela is thrust into the spotlight for all the wrong reasons! Can she convince all those close to her — especially her boss and her boyfriend — not to believe everything they read? And will Hollywood ever win Angela’s heart?

The ReviewI thought I loved I Heart New York, but I’m pretty sure I loved this sequel even more! I Heart Hollywood was fast paced, equally, if not more hilarious and I couldn’t put this fabulous chick lit down.

This book takes place in just over a week and it speeds along, including a twist which even  I wasn’t expecting. It was laugh out loud funny and I couldn’t help but giggle frequently at Angela’s antics. She’s disheveled, a bit ditzy, and fully flawed, but completely lovable. And it’s not just her character I loved, but all of them even the new ones who we meet in this book. The characters are so fully formed and distinct that I felt as if I knew each one, even though the novel is written from Angela’s perspective, and I couldn’t wait to see what they would do next.

I Heart Hollywood is the second installation in this fabulous, must read summer series for chick lit lovers. I am already a hell of the way through the next book which is I heart Paris and seem to be loving that as well but that will  be my next book. This book could stand alone without have to read the first novel, but why deny yourself the pleasure! Pick up both these books today!

Have you read this book what did you think?

One thought on “Bookworm #6 – I Heart Hollywood”