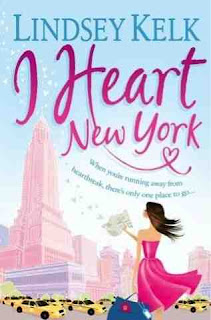 Hi Guys
Today I am going to review the first book in the I heart series which I am currently reading. I heart New York didn’t take me long to complete I think in total or was around a week. I am now up to I heart Vegas which is the fourth one.
The Blurb
When you’re running away from a broken heart, there’s only one place to go…Adjusting tiaras at the foot of the aisle, Angela and her best friend prepare for the wedding of the year. But events don’t go as planned. And when a girl is in possession of a crumpled bridesmaid dress – and can’t go home – New York (for the very first time) seems like an excellent idea. Angela’s new friend Jenny Lopez gives Angela a whirlwind tour of the city that never sleeps, and a makeover. Who hasn’t dreamed of starting afresh with a sassy New York wardrobe, a new haircut and a trip to the make-up counter? Before she knows it, the new Angela is getting over her broken heart by having dinner with two different boys. And, best of all, she gets to write about it in her fabulous new blog. But it’s one thing telling readers all about your romantic dilemmas. It’s another trying to figure them out for yourself
My review
Right from the start I loved this book. I am a big fan of reading books where the characters are from the UK. Angela was the cutest NYC-challenged girl. Her bubbly no-nonsense personality brought friends to her circle in droves. With the help of Jenny Angela was able to build herself back up in her new city.All of the characters were very real. I could see these people existing which kept me glued to the book. There were such emotional situations for Angela, that I felt her struggles right along with her. This meant you connect with Angela even more..Although it was an awkward situation for Angela to balance two men in her life, I liked the one she chose which I think was an added bonus in the book. I liked the added elements of shopping and eating in this book. Other books I have read in this genre do not focus on this part of a breakup.I did wonder at times where Angela’s shopping money was coming from but that’s me been nosey and jealous.
Have you read this book if so what did you think about it?
Charlotte x