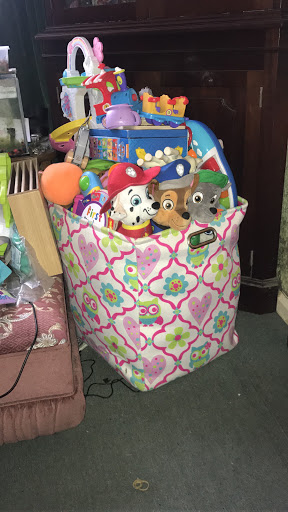 This time of year everybody seems to be trying to make more room because we know that most of us, if you are anything like us, do not have a lot of space for the impending gifts which will be received no doubt at Christmas by Jess. Over the last few weeks, it may even be months I have been trying to make more room by getting rid of items which she no longer wants or needs. I am not trying to be minimal at all because I know I could get rid of more and this is something which I plan on doing before the festive period is upon us.
The first thing which I have done is made sure that I completely emptied her toy box as you can see it is actually still pretty full and I wish it still looked as neat as it did this day. When I had all of her toys out I took out some items which I knew that she no longer played with and hadn’t do so for a period of a few months. I actually took them to the charity shop in order for someone else to get some more use and love out of them I think I removed at least 5 cuddly toys. In doing this it allows her to play with toys which she may not have seen for a while and also allows you to give toys a trail so if for example she does not reach for some of them in the next few weeks I will be removing them from her toy box and getting rid of them.
DVD’s are something which I had a fair few of, however, now in the age of being able to stream a film on sites such as Netflix and Amazon both which I have subscriptions too. I found myself no longer reaching for my physical copies. I am sure that there is many of you like this and complain that you do not have a lot of space. If you do not use them what is the point of having them. I did actually keep some like box sets and a couple of films which I may find hard to find online. However, I think I managed to get rid of something like 16 DVD’s all which were taking up space for no reason and have not been touched since before Jess was born. You could sell them on sites like Music Magpie I know this is what Joe did when he got rid of most of his collection.

Clothes are another area which no doubt if you are a little bit like my family an area which you can declutter. I still have things which I have not worn since having Jess which I now no longer like so I have bagged them up and sent them to the charity shop I know this is something which I should do more often because I have way too many clothes which I no longer wear and then wonder why I have no space at all. Since the weather has changed why not got through your winter clothing and get rid of bits which either no longer fit you or that you don’t like who knows you might earn something on Ebay for your troubles.

Decorations these are not something which we as a little family have a lot of but every year when my Mum gets the decorations out there are always a few which she is like oh gosh I do not know why we actually kept that one. Usually, the reason she is staying this is due to it been past its best so this year before you put the decorations back in the loft the ones which you are not using why not check if they are still in a good condition or if you still like them because if the answer is you do not like them why not declutter them and make some precious loft space again. I know this is something which I will be doing most years when we get our own house together.

Gifts you do not want that are still in the packaging I am sure there is a few of those sitting around in your house. Either ones which you have been gifted or ones which you have purchased for other people and then for some reason never ended up giving them. This is something which I have done in the past and it means that you can save some money which is something which I feel like people want to do this a lot if this time of year. I have once it with beauty products which I have not loved for it sample I have split them and given them to multiple people because I know that I would never actually use them. Make sure that you do not regift to the person who you gave you it because I feel like they might actually realise what you have done.

What areas are you looking to declutter before the festive season is completely upon us?